His Very Best: Jimmie Carter, A Life
with Jonathan Alter 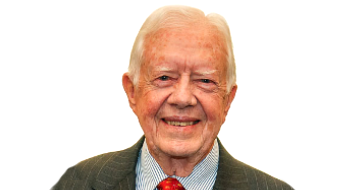 Jonathan Alter is an award winning author, former editor of Newsweek, political analyst with MSNBC and PBS, documentary filmmaker, columnist, television producer, and radio host. Join us a he present, "His Very Best: Jimmie Carter, A Life" in a free Zoom webinar.

Jonathan Alter is a specialist in the American presidency, having covered and interviewed, Nixon, Ford, Carter, both presidents Bush, and Obama. This history, plus his three New York Times bestsellers, The Defining Moment: FDR’s Hundred Days and the Triumph of Hope (2006) The Promise: President Obama Year One (2010) and The Center Holds: Obama and his Enemies (2013), have given Alter his deep knowledge of the backgrounds and pressures in the lives of presidents, culminating in this biography of Jimmie Carter. Alter’s work defines a drama of the bright boy who rose from farm life without electricity or running water in the depth of the Jim Crow south to civil rights and environmental leadership as the President of the United States.

Jonathan will sign bookplates for those who purchase the book. Please send the address and name or names to us for his designation and we will mail you the signed bookplate.

Unless otherwise noted, these events will be held at:
The Stevenson Center on Democracy
25200 N St. Mary's Rd, Mettawa (Libertyville), IL   60048


The Adlai Stevenson Center on Democracy is an independent, non-partisan, not-for-profit organization. The ASCD operates out of the Adlai E. Stevenson National Historic Landmark as a licensee of the Lake County Forest Preserve District. The license does not imply the District's endorsement of specific ASCD positions or presenters.